You Are Here: Interdisciplinary research and technology in everyday life inspired the students of tomorrow at the MINT-EC-Camp "Production Technology" 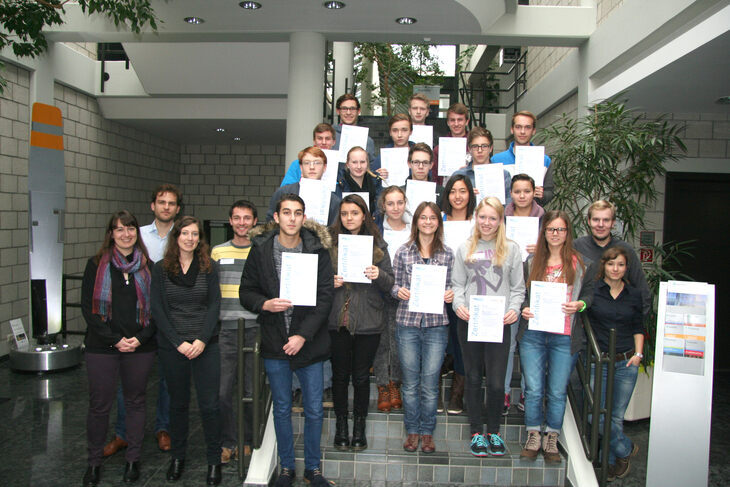 The fact that computer scientists, mathematicians and ergonomists as well as mechanical engineers concentrate on the subject production technology in research and everyday work of the Cluster of Excellence “Integrative Production Technology for High-Wage Countries” was for many of the 19 MINT-EC pupils, who visited the MINT-EC Camp in the last week in Aachen, not only new, but rather particularly impressive. For many of them it is certain to study a technical subject after school, but to make a final decision is often pretty hard. It is reassuring that they know how many diverse opportunities they have - at least since the comprehensive overview of the wide range of research projects of the Cluster of Excellence.

Already during their studies many pupils want to look beyond their own nose and not to be committed to their own disciplines for the future. This is the aspect that is fundamental in the joint research within the more than 25 research institutes of the Cluster of Excellence and is practiced each and every single day. “Especially this interdisciplinarity within the university the students experienced at first hand has fascinated and was not aware for many of them” said a delighted Anja Schaumlöffel of the school project agency of RWTH Aachen University about the enthusiasm of the pupils after the great MINT-EC-days.

The dedicated pupils who had come from all over Germany to Aachen had good fun at the numerous experimental workshops that were offered by the various institutes of the Cluster of Excellence. For example, they could experience through play how modern production managements can be understood with simple means like bottle caps or building blocks or how to control robots as well as what is behind the production measurement or how fascinating working with lasers can be. Hands-on technology in all areas – and that is what the young participants had also desired. “Fascinating how receptive the young people are, for example, they have understood our Beer-Distribution-Game directly and implemented very efficiently. It was really fun”, praised Marcel Groten of the participating research institution FIR e.V. at the RWTH Aachen the motivated group. The other scientists who offered insights in the hands-on workshops into their work agree.

As part of the camp, the group also visited the RWTH Science Night “5 to 12” on Friday evening. The future students had a beautiful and exciting couple of days over here and since we can only hope that one or two are going to study in Aachen.