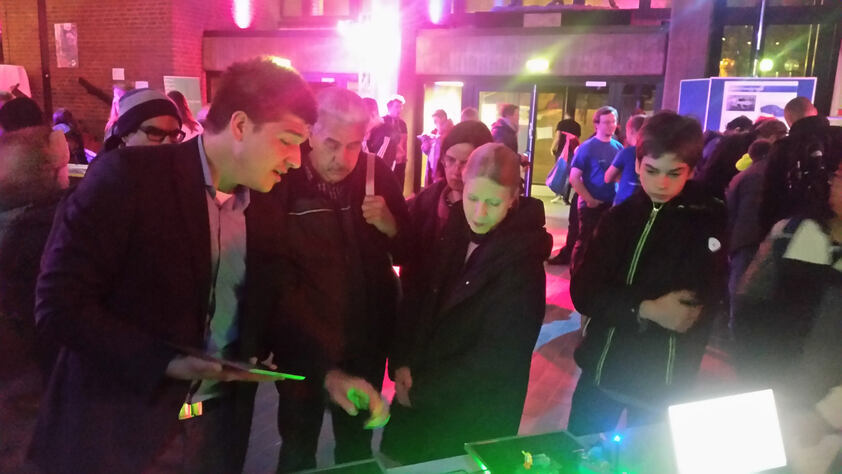 The CoE partricipated in the yearly "5 to 12" RWTH Science Night once more on November 11, 2016 by presenting a fascinating example from the research field "Industrie 4.0" at the Cluster‘s exhibition stand. Present at this year’s exhibition was Max Hoffman, scientist from the CoE partner institute Cybernetics Lab IMA/ZLW & IfU, who brought along his "OPC UA Industrie 4.0 demonstrator". With the help of the demonstrator which was first presented at this year’s Hannovermesse, Hoffmann explained a possible networking strategy for industrial production based on the well-known Raspberry Pi single board computers as control units. The oppurtunity to use real-time process optimization strategies was especially highlighted as a forward-looking innovation and attracted numerous visitors to the exhibt inside the Kármán Auditorium. In addition to the exhibit of various institutes and projects, the science slam, talks on subjects from the natural sciences and humanities as well as sightseeing tours and a laser show offered the visitors many highlights of the science night. Of course the visitors didn’t have to miss out on the "Night of the Professors“ where the professors entertain the visitors as DJs to continue the iconic night until the early morning hours, constituting an appropriate finale of the successful evening.