You Are Here: Self-optimizing Assembly of Large Components 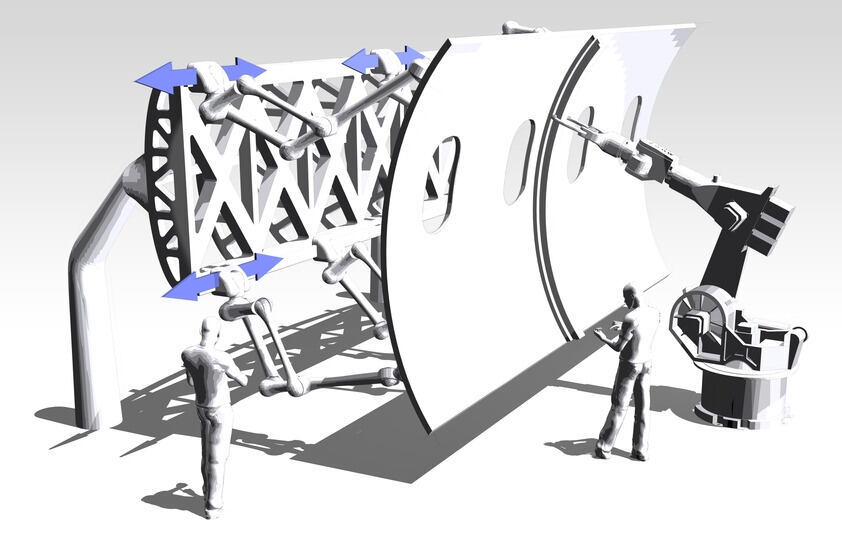 An increasing number of industrial companies are confronted with the challenge of automating complex assembly processes, in a flexible manner, in order to compete on international markets. With ever increasing complexity of a process however, the complexity of production equipment and control systems increases as well. And as not all production states can be planned in advance, a reliable control of these processes cannot be guaranteed. A current research approach for mastering this complexity is the use of “self-optimizing systems”, which aside from controlling can also fulfill planning tasks, thus ensuring control over the complex system. Approaches for self-optimization are currently being researched for the application in the assembly of large components (e.g. planes, wagons, or wind turbines). Large components pose special challenges for production engineering, as they tend to deviate significantly from a theoretically planned geometry (because of deformation due to gravity, manufacturing tolerances, or fluctuations in temperature).

In order to compensate for deviations in assembly processes, conventionally fixed steel jigs, which exactly map the geometry of the component and compensate the deformations are used. Since the precision in the manufacturing of these jigs directly affects the dimensional accuracy of the components, they have to be produced within a tenth millimetre tolerance or have to be measured during commissioning. Not only has the precision of these tools led to enormous costs, but also their size. As they are custom designed to fit the geometry of one component, multiple of the large, expensive jigs have to be procured to cover a variety of components. A more flexible technology for the positioning of components is the use of robots. As the large components have to be supported at several grasping points, the production of task-specific handling units can be an economic alternative to industrial robots. By a simple reprogramming of the robot motions, various components can be moved and positioned within the workspace. The low accuracy of a robotic system, in comparison with a fixed tool, can be compensated by the integration of external
measurement systems to measure and re-adjust the positional deviation of the manipulating unit. The usage of cooperating handling units combined with metrology, instead of purely fixed jigs, leads to a higher installation complexity and a larger planning effort for operating this system. 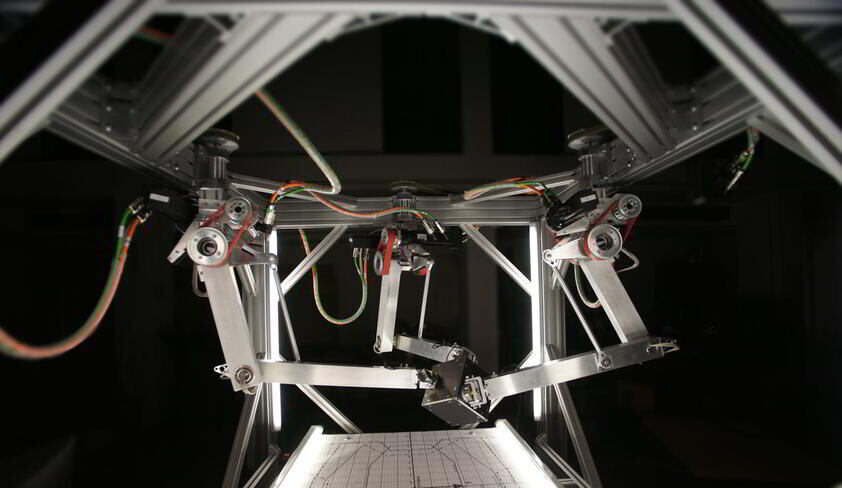 For the execution of such complex production processes, the use of “self-optimization” is currently being researched. Compared to state of the art control systems, self-optimizing assembly systems get assigned more
degrees of freedom for planning and control. By that, the system will be able to make decisions “autonomously”, change its behaviour “flexibly”, and reach the assembly goal “self-optimizing”, within predefined limits. Therefore, the system needs to be able to perceive its environment with suitable sensors, and possess sufficient degrees of freedom for adapting the process to the current situation. In order to fulfil the requirements of the production process self-optimizing, a changeable assembly system is required. This system has to offer at least the mechanical degrees of freedom that are required to adept itself to the task. Additional mechanical degrees of freedom for a self-optimizing assembly process are achieved by a reconfigurable handling technology. A promising approach is the manipulation principle PARAGRIP, which integrates the handling object, in this case an aircraft shell, as a part in the kinematic chain of the created structure. By an autonomous selection of suitable contact points, the system can be reconfigured without mechanical modifications. This creates additional degrees of freedom to achieve the desired level of changeability. 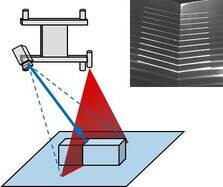 In order to transfer planning tasks to a machine control, mathematical and physical models have to be developed which describe the states and correlations between component, process and assembly system. While kinematic and dynamic models for the description of a handling system mostly exist, there is a fundamental need for research on the description of the components behaviour under the influence of external forces. The goal is to create models based on measurement data and to derive robot motion based on the individual component in order to compensate for its deformation. The new manipulation technology has to be designed and implemented based on the requirements of a changing process with focus on flexibility and changeability. Therefore, a consistently modular assembly system is required, which can be used to react quickly and simply to altering requirements. In this respect, the selection of the structure and its dimensions pose a major challenge. Furthermore, the additional degrees of freedom lead to a much higher complexity of the manipulation system. For still being able to find the optimal operating point, the required planning algorithms for the systems configuration and motion planning need to be deduced first. Thus, a changeable and efficient operation can be guaranteed.