You Are Here: Young Researcher Award 2014 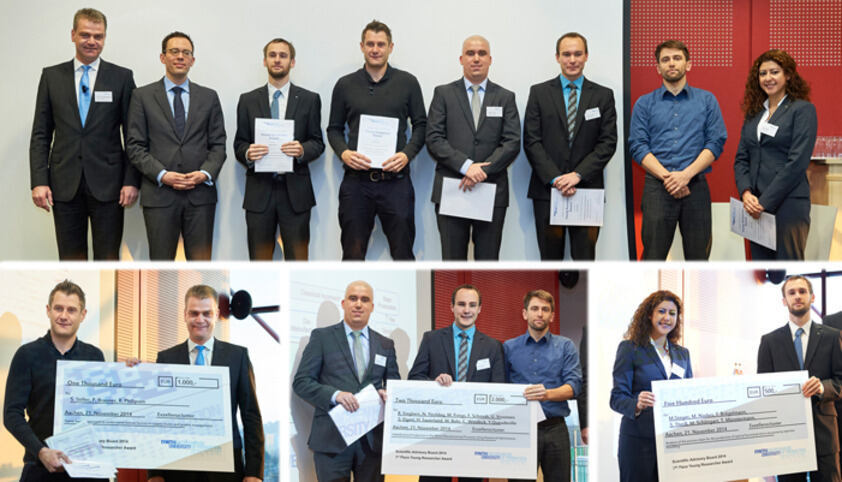 On November 21, 2014, the Cluster of Excellence "Integrative Production Technology for High-Wage Countries" awarded the "Young Researcher Award 2014". The prize bestows young scientists who make a significant contribution to the integrative production technology through their research projects. This year, the award ceremony was held in Aachen at the conference "Advances in Production Technology" to which the international Scientific Advisory Board of the Cluster of Excellence had been invited as well.

With the project "Individualized production in tool-based production processes by using numerical optimization" the research group, consisting of assistants of the Foundry Institute (GI), the Chair of Computational Analysis of Technical Systems (CATS) and the Institute of Plastics Processing (IKV), developed solutions which can reduce the expensive and time-consuming production of tools by virtual dimensioning and process optimization.

The young researchers Roland Siegbert (CATS), Frank Schmidt (GI), Markus Frings (CATS), Christian Windeck (IKV), Yann Quedeville (GI), Dr. Stefanie Elgeti (CATS), Nafi Yesildag (IKV) and Uwe Vroomen (GI) participated in this interdisciplinary research project. Prof. Christian Brecher as spokesman of the Cluster of Excellence presented the award endowed with 2000€ to the successful team. The award represents the recognition of their outstanding research findings, the awareness of the general public and the support of the "integrativity in production technology."